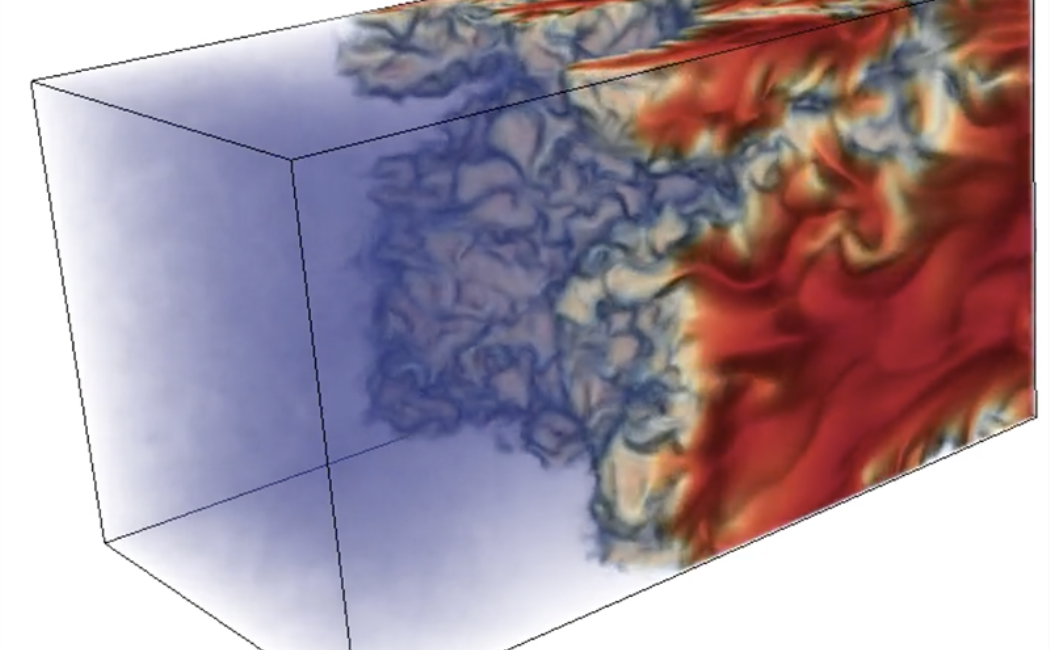 Direct numerical simulations (DNS) of combustion provide valuable insights into the physical and chemical aspects of the flow-flame interaction, thereby improving our fundamental understanding of combustion processes that occur in practical devices. The information obtained from the simulation complements experimental observations by providing three-dimensional characterizations of the combustion evolution and interaction with the flow that are not available in experiments. Besides, DNS is employed to develop a high-fidelity database that can be used to verify and validate the modeling approximations used in lower fidelity calculations, such as those given by the large eddy simulation (LES) and Reynolds-averaged Navier-Stokes (RANS) approaches.

The effect of turbulence on premixed flame propagation characteristics has been a long-standing fundamental question in combustion research. Many existing theoretical descriptions are based on simple chemistry and at weak to moderate levels of flame wrinkling, and thus, need to be carefully assessed at higher levels of turbulence with consideration of detailed chemical pathways for combustion. To this end, high resolution direct numerical simulations (DNS) of three-dimensional premixed flame propagation through homogeneous isotropic turbulent flows have been conducted at high Reynolds and Karlovitz numbers, and the detailed simulation data are analyzed to investigate various statistical characteristics of turbulent flame dynamics.

Other fundamental issues on turbulence-flame interaction, such as the alignment of strain rate eigenvectors with the scalar gradient at different temperature iso-surfaces, and the resulting characteristics of the intermittency in the scalar dissipation rates, are currently being investigated in practically relevant turbulent conditions, e.g., elevated pressures, using complex kinetics schemes. As pressure is increased, the flame front gets thinner, more small-scale wrinkling is generated and larger curvatures are observed. Hence, these computations require very fine resolutions. In addition, the employment of detailed kinetics models to simulate the combustion of fuels related to practical applications, such as syngas, DME and methanol, enables the investigation of highly turbulent premixed flames of practical interest. The temporally and spatially resolved simulation data allow us to study flame structures that have not been explored in the past. Furthermore, the Markstein number effect on the turbulent flame speed is also thoroughly investigated, since it is known that the normalized turbulent flame speed decreases with increasing Lewis number or Markstein number. This mechanism affects the turbulent flame speed in primarily two ways: (i) by changing the average local burning rate through tangential straining, and (ii) by changing the overall flame surface area due to differential propagation at positive/negative curvatures. Finally, we have been investigating the turbulent flame topology of highly turbulent premixed flames in the distributed combustion regime, where the small scale turbulent eddies penetrate through the flame making the detection of the flame front a challenging task.​